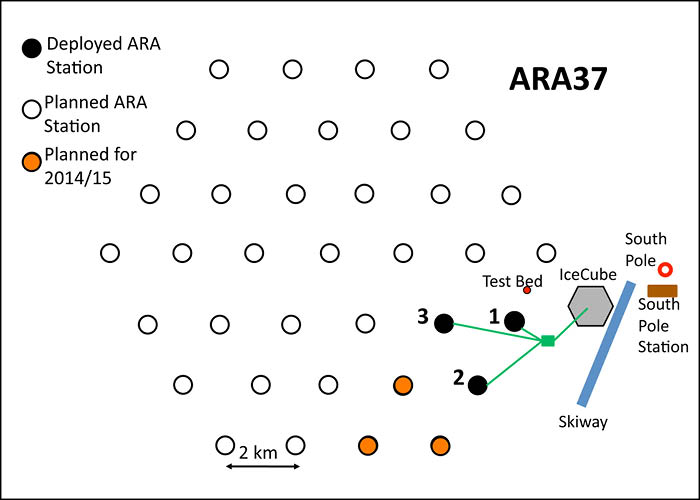 Neutrinos normally pass through matter without stopping and without interacting. This small "cross section" makes them ideal messenger particles from space since the intervening distance hardly affects them.

The same quality also makes their detection difficult. A very large detector is required to capture the rare instances when neutrinos do interact with something.

To see radio signals, a detector needs to be radio-transparent and quiet in terms of person-made radio noise. The idea of embedding a radio detector in the polar ice mass for detection of high energy neutrinos was proposed by Gusev and Zheleznykh in 1983.

The cold, extremely radio-transparent ice of the South Pole is an excellent medium in which to embed the receiver antennas. The ARA detector has built on earlier ideas from the ANITA balloon experiment, the RICE radio neutrino experiment, the IceCube Neutrino Observatory at the South Pole, and radio detection efforts within IceCube.

For information about the Antarctic seasons between 2010-2012 when ARA was deployed, head to duvernois.blogspot.com.